Circadian rhythms describe patterns of behaviour that exist in most things that live on this planet of ours. It’s not just the higher mammals that exhibit these patterns, you’ll find it in most organisms, from plants and animals all the way down to microbes. However, we are the only species that makes a habit of living in ways that disturb our natural balance with the world around us.

Circadian comes from the Latin ‘circa, meaning’ ‘about’ and ‘dies’ meaning ‘day’. So, a circadian rhythm is a repeating pattern based on the natural progression of night and day. The study of circadian rhythms is chronobiology; this time from the Greek ‘chronos’, meaning ‘time’, ‘bio’ meaning ‘life’ and ‘logos’ meaning ‘discourse’ or ‘thought’. What it must be to have had a classical education.

As we’re all aware, the obvious example of a circadian rhythm is our decision to sleep when it's dark and to do stuff during the day. On one level it’s just the practical thing to do, given that most of us require illumination to function, so darkness serves us well as the time to rest. But there’s a chemical response going on as well.

During the day, the eye gathers light information, most of which we translate into images of the external world, but the eye also gathers information about light values, in particular the amount of blue light that is present in the environment. Most of us know about the rods and cones that govern the visible side of things, but recently another cell has been found within the retina. These are called, unpromisingly, the Intrinsically Photosensitive Retinal Ganglion Cells (or ipRGC). They are sensitive to a narrow range of blue light, around 480nm, and it's these cells that control the ability of the body to go to sleep. 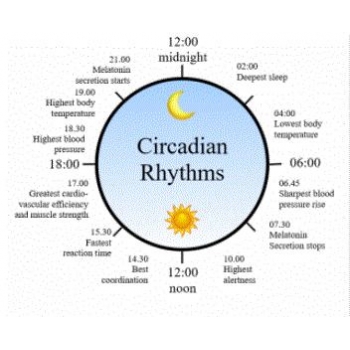