A NORWEGIAN hospital is using orange light to reduce hyperactivity and anxiety in psychiatric patients.

The lighting control system at the acute care centre at Saint Olav’s Hospital in Trondheim removes the blue component from the light completely from 6pm in the evening in a bid to boost levels of the body's sleep hormone, melatonin.

The patients must remain indoors throughout the day and night in an area where the light is controlled and carefully planned. During the day, the lighting resembles daylight but from 6pm onwards, it changes to orange light. This lasts until 11pm, at which point an orange light is dimmed to 25 per cent until 6am in the morning.

When the orange light is on with no blue light is emitted, it appears that the body releases more melatonin in the blood. The patients appear to become more tired and less hyperactive. For many people with bipolar disorder, the hyperactive phase involves a conspicuous absence of sleep, and treatment with orange light may therefore result in more normal sleeping patterns, say doctors at the facility. 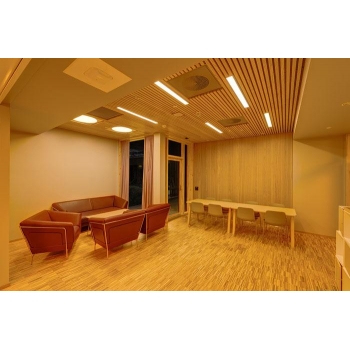