THE UNIVERSITY of Illinois is currently trialling exterior lights with integrated emergency response buttons in a bid to boost the safety of its students on campus.

Its smart street lighting columns include what’s been called the ‘panic buttons’ which link directly to the institution’s on-site security response teams. Once pressed, first responders are notified via an app which pinpoints the location of the alert on a map.

Additionally, the light itself and a number of nearby lights pulse from 10 to 100 per cent brightness to allow the scene of the incident to be identified quickly and easily.

t’s also hoped that the flashing of the LED lights will interrupt any on-going criminal or anti-social behaviour by alerting the perpetrators that the security personnel are aware and are on their way to the location.

The lights with integral emergency response buttons are just part of a wider strategy by the university to increase safety and security for its students, faculty and staff on its sprawling campus.

To complement the panic lights, the university has developed an app for smart phones for those who may feel unsafe walking at night.

By using the network infrastructure of the smart street lights and special integrated video sensors which count pedestrians, the SafeWalks app can determine the safest walking route to take through the campus. 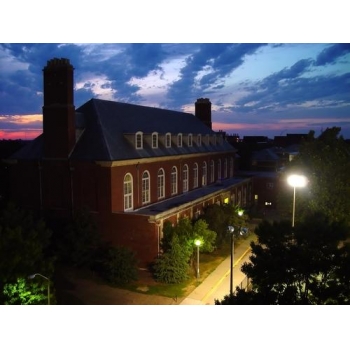