MORE EVIDENCE that light pollution is harming wildlife has emerged in a study on frogs and toads.

Scientists have discovered that streetlighting is keeping toads up at night and stunting their growth, while also stopping frogs from laying their eggs. They say the disturbance caused by light pollution could be ‘pushing them over the edge’.

Despite the scale of this disturbance, relatively little is known about the impact this is having on the animals whose habitats have been profoundly changed by 24-hour lighting.

Researchers at the Case Western Reserve University College in Cleveland, Ohio, constructed artificial ponds and observed the effects of constant light on toads.

As the toads grew up, the light made them behave strangely.

‘If we continued exposing them to artificial light they changed their behaviour so they were active more at night, and they also had slower growth – about 15 per cent smaller at the end of the experiment’, Dr Michael Benard told The Independent.

The stunted growth seen in the illuminated toads was likely the result of a 24-hour lifestyle in which they never had a moment to rest.

‘They’re always out there, always moving, so this may mean they are burning more energy and growing less,' said Dr Benard. 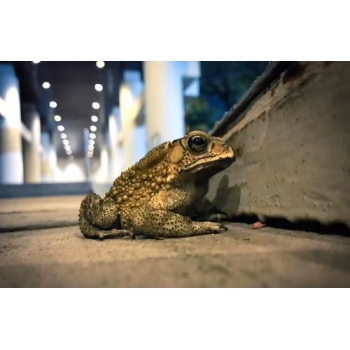