Researchers at the University of Tokyo have developed a flexible electronic skin with an embedded organic light-emitting diode (OLED) display. While several groups around the world have developed similar “smart skin,” this latest invention stands out for its excellent display, ability to move with the skin, and its resilience. Previous attempts at OLED stickers have only lasted a few hours before breaking down, but this new version lasts several days. The researchers described their invention in a paper titled, “Ultraflexible organic photonic skin,” which published in the journal Science Advances.

We demonstrate ultraflexible and conformable three-color, highly efficient polymer light-emitting diodes (PLEDs) and organic photodetectors (OPDs) to realize optoelectronic skins (oe-skins) that introduce multiple electronic functionalities such as sensing and displays on the surface of human skin. The total thickness of the devices, including the substrate and encapsulation layer, is only 3 μm, which is one order of magnitude thinner than the epidermal layer of human skin.

Similar electronic skin doesn’t last long because oxygen and water vapor from the air penetrates it and damages the electronics. The Tokyo team extended the skin’s lifetime by creating a protective film made from layers of inorganic silicon oxynitrite and organic parylene. Just like real skin, the thin device is able to stretch, wrinkle, and go back again without breaking. The electronic version, however, also has indium tin oxide electrodes, polymer light-emitting diodes, and organic photodetectors. It could eventually be used for communications or just as an entertaining consumer device, but it is especially ideal for health monitoring. Currently, it can be measure blood oxygen levels, and in the future it could be used to measure, track, and display many other biomarkers. 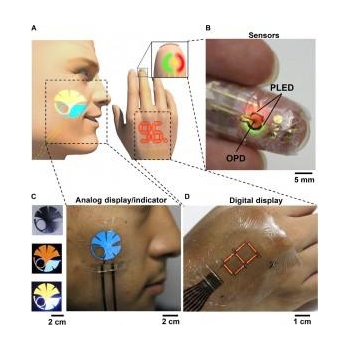