A team of Columbia Engineering researchers, led by Applied Physics Assistant Professor Nanfang Yu, has invented a method to control light propagating in confined pathways, or waveguides, with high efficiency by using nano-antennas. To demonstrate this technique, they built photonic integrated devices that not only had record-small footprints but were also able to maintain optimal performance over an unprecedented broad wavelength range.

Photonic integrated circuits (ICs) are based on light propagating in optical waveguides, and controlling such light propagation is a central issue in building these chips, which use light instead of electrons to transport data. Yu's method could lead to faster, more powerful, and more efficient optical chips, which in turn could transform optical communications and optical signal processing. The study is published online in Nature Nanotechnology April 17.

"We have built integrated nanophotonic devices with the smallest footprint and largest operating bandwidth ever," Yu says. "The degree to which we can now reduce the size of photonic integrated devices with the help of nano-antennas is similar to what happened in the 1950s when large vacuum tubes were replaced by much smaller semiconductor transistors. This work provides a revolutionary solution to a fundamental scientific problem: How to control light propagating in waveguides in the most efficient way?"

The optical power of light waves propagating along waveguides is confined within the core of the waveguide: researchers can only access the guided waves via the small evanescent "tails" that exist near the waveguide surface. These elusive guided waves are particularly hard to manipulate and so photonic integrated devices are often large in size, taking up space and thus limiting the device integration density of a chip. Shrinking photonic integrated devices represents a primary challenge researchers aim to overcome, mirroring the historical progression of electronics that follows Moore's law, that the number of transistors in electronic ICs doubles approximately every two years. 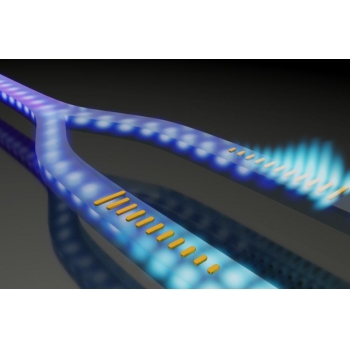