How effective are UVC LEDs?

Answered by the technical team at RayVio corporation.

Ultraviolet (UV) light has been used for many years in industry and in health and hygiene regimes. A new generation of LEDs now looks set to challenge conventional UV fluorescent sources. But how well do they actually perform?

What is the wavelength range of UVC LEDs?

UVC LEDs are typically defined as having a wavelength on the electromagnetic spectrum of 200nm to 280nm.

What is the ‘germicidal range’ of ultraviolet light?

According to the International Ultraviolet Association:  “The portion of the UV spectrum (the ‘germicidal’ region) that is important for the disinfection of water and air is the range that is absorbed by DNA (RNA in some viruses). This germicidal range is approximately 200-300nm.”

The germicidal range is known to extend beyond 280nm and is now generally thought to extend to 300nm, although this too may change with more research. Scientists have proved that wavelengths between 280nm and 300nm are germicidal and can be used for disinfection and sterilisation. 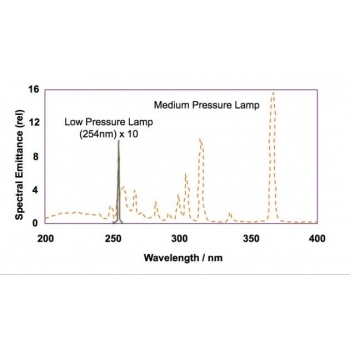