The Revolution: the led light source that even leaves incandescent lamps in the shade

SunLike from Seoul Semiconductor is the response to the hitherto unanswered questions on the quality of artificial light.

Seoul Semiconductor and Toshiba surprise the lighting world with a new development that looks like it could mark the beginning of a revolution.

For some, it was purely a question of time, for others a seemingly unattainable goal: an artificial light source that is as perfect as daylight – or at least almost as perfect. Seoul Semiconductor are currently practically overwhelmed with queries and “applause”. In June, they introduced the SunLike TRI-R LED onto the market, a product that has even taken critics of LEDs by surprise.

The new SunLike LEDs emit light with virtually the same spectral composition as sunlight. It remains a copy, but according to state-of-the-art facts and findings it is so convincing that it is even leaving the incandescent lamp in the shade, the artificial light source that in the past was always deemed second only to daylight. The light spectrum, which is closer to that of the sun than even deemed possible, is achieved through the combination of LED chip technology from Seoul Semiconductor and TRI-R phosphor technology from Toshiba Materials. The result: a Purple LED with special qualities. 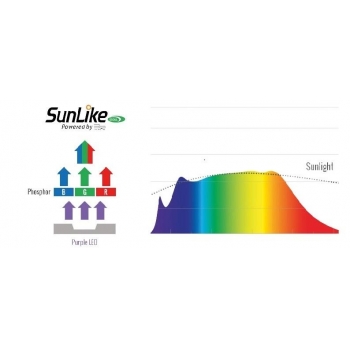